The research focus of the Professorship of Cardiovascular Physiology is the study of the pathophysiology of cardiac arrhythmia and heart failure. Heart failure leads to functional and structural alterations at the macroscopic as well as the microscopic and the molecular level, a process called remodeling. Cardiac remodeling during heart failure alters the electromechanical function of the heart, for example by altering the expression of ion channels that control cardiac excitation and repolarization, which increases the risk for cardiac arrhythmia including sudden death. Structural alterations in heart failure, such as an increase in connective tissue (fibrosis) or an alteration of the myocyte architecture, can decrease cardiac contractility and worsen heart failure. Our primary goal is to further understand the molecular mechanisms that underlie remodeling of the heart. This might lead to new diagnostic, therapeutic, or preventive strategies. 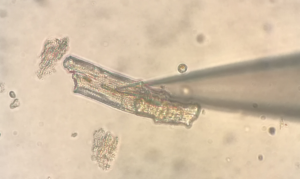 To investigate function and regulation of ion channels, a broad range of sophisticated electrophysiological, molecular biological, and cell physiological methods is applied on cultured cells, native tissues, animal models (e.g. transgenic mouse lines), and human cells. For example, the patch-clamp technique allows for a detailed analysis of membrane potential and ion channel function by electrically controlling individual cardiac myocytes. Ion channels are particularly important in shaping the action potential and in initiating the contraction. It is well established that regional differences in action potential duration (APD) in different areas of the heart are of great importance for a normal course of repolarization. For example, within the left ventricular free wall, APD is much longer in endocardial than in epicardial myocytes with the consequence that endocardial myocytes repolarize last, although they become depolarized first. Hence, the wave of excitation travels from endocardial to epicardial regions, while the wave of repolarization travels in the opposite direction. Under pathological conditions, such as cardiac hypertrophy or failure, this well-organized sequence of events is altered which is thought to contribute to the increased risk of cardiac arrhythmia and sudden cardiac death of patients with cardiac hypertrophy or failure. In order to further understand the underlying mechanisms, our research group investigates the regulation and pharmacology of ion channels (Na+, K+ and Ca2+ channels) that are responsible for cardiac excitation and repolarization by using animal models as well as tissue or cell culture. At present, the primary focus lies in the identification of signaling cascades that participate in the regulation of those ion channels under pathophysiological conditions. A promising target is the cardiac mineralocorticoid receptor that participates in the regulation of cardiac Ca2+ and K+ channels. It is hoped that a more detailed characterization of cardiac ion channels will lead to a better understanding of the mechanisms underlying cardiac repolarization and will help to develop therapeutic strategies to influence the organization of repolarization and hence prevent the development of malignant arrhythmia. 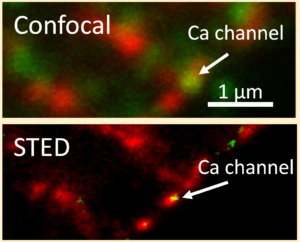 Electromechanical coupling is the process that links electrical signals from the cell membrane, i.e. action potentials, to the mechanical action of the cell, i.e. the contraction. In the heart, a Ca2+-influx into the cell via L-type Ca2+ channels activates ryanodine receptors located intracellularly in the sarcoplasmic reticulum (SR) which in turn release much more Ca2+ from the SR. This process, called Ca2+-induced  Ca2+-release, activates contraction and controls its magnitude. For example, when not enough Ca2+ is released from the SR or the release is too slow, the resulting contraction is inefficient and weak. Multiple mechanisms can cause alterations in electromechanical coupling. In heart failure, alterations in the microarchitecture of cardiac myocytes particularly contribute to a decrease in Ca2+ release from the SR. 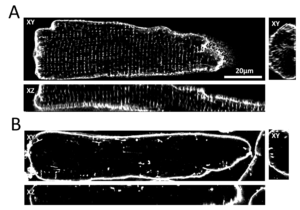 Fig. 2: A 3D confocal microscopic image of the t-system in a cardiomyocyte. B Cardiomyocyte with loss of t-system, e.g. in heart failure

The transverse tubular system (t-system) in ventricular cardiomyocytes consists of many tubelike membrane invaginations that originate from the cell surface and reach deeply into the cell. L-type Ca2+ channels are primarily localized in the t-tubular membrane in close vicinity to the ryanodine receptors. An important task of ttubules is therefore to facilitate a close contact of L-type Ca2+ channels to ryanodine receptors in order to provide the condition for an efficient and quick release of Ca2+ from the SR. Three dimensional high resolution microscopy (confocal or STED microscopy) reveals that in heart failure, t-system structure and expression of Ca2+ channels is substantially altered. These alterations lead to delayed, reduced, and disorganized Ca2+ release from the SR which can also be identified using high resolution microscopy together with Ca2+ indicators and computer assisted image analysis. Using cell- and tissue culture models derived from human heart samples, we investigate the cellular and molecular mechanisms underlying t-system alterations with the aim to stop or even reverse these processes. Furthermore, we link structural and functional alterations at the cellular and molecular level to the clinical picture of patients in order to identify prognostic or diagnostic markers or even new therapeutic strategies.